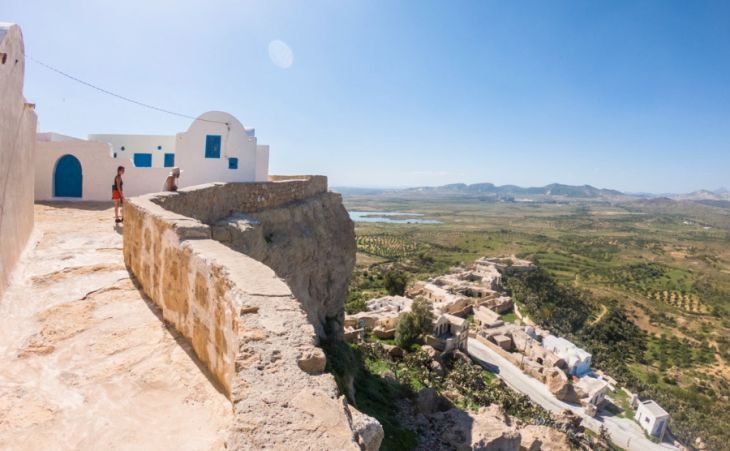 Takrouna, Jradou and Zriba are three hilltop villages linked by the legend…

Between Zaghouan and Enfidha, the Atlas mountains vanish in the great plain of the Tunisian Sahel (shore). This is where, clinging to the few isolated mountains still standing, three villages can be found: Takrouna, Jradou and Zriba.
According to oral tradition, these three villages share a common history.
Indeed, it is said that three brothers from the Ben Guiga clan, coming from Morocco, came to this region and chose each a rocky outcrop to found a village upon it.

Actually, the first village, Takrouna, is partly inhabited by members of the Ben Guiga clan. It is said that they once raided travelers and inhabitants in the plain, then took refuge in their impregnable village.
In fact, the village is certainly very old. It bears a name of Berber origin which means “fortified site” or “slope”.
The village was shared among two other groups. The Touatia lived around the zawiya (shrine) of Sidi Abdelkader, of which the beautiful green-tiled dome dominates the village. It is said that they descended from Berber Jews.
The Ben Youssef were known for their legal literacy and served as Islamic notaries for the neighboring population.
Takrouna is still inhabited and kept its small Berber whitewashed houses clinging to the hillside, adorned with protective symbols such as the hand and the fish.
From the top of Mount Takrouna, the view over all the surroundings is breathtaking. This 200-metre high mountain, isolated among the plain, was renowned for its splendor and celebrated by popular Bedouin songs. 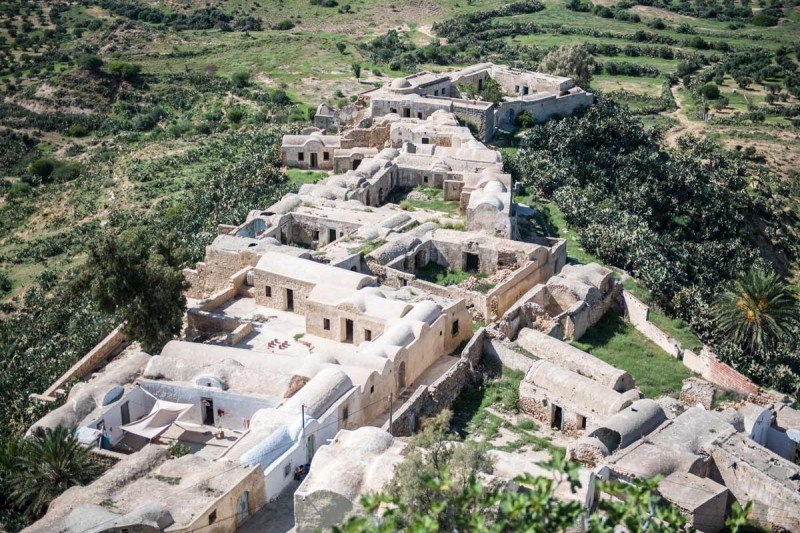 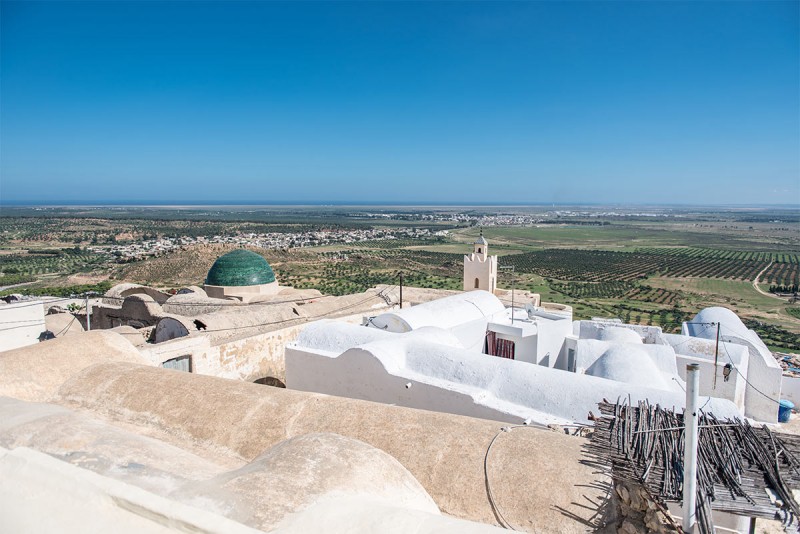 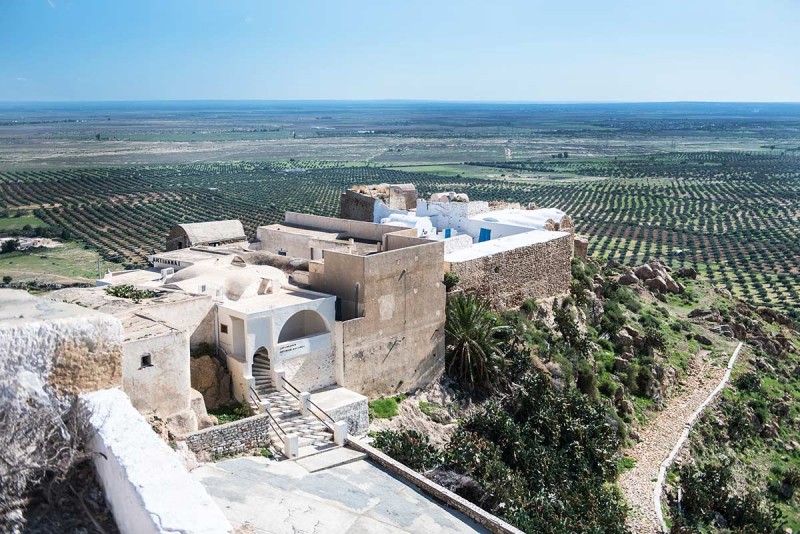 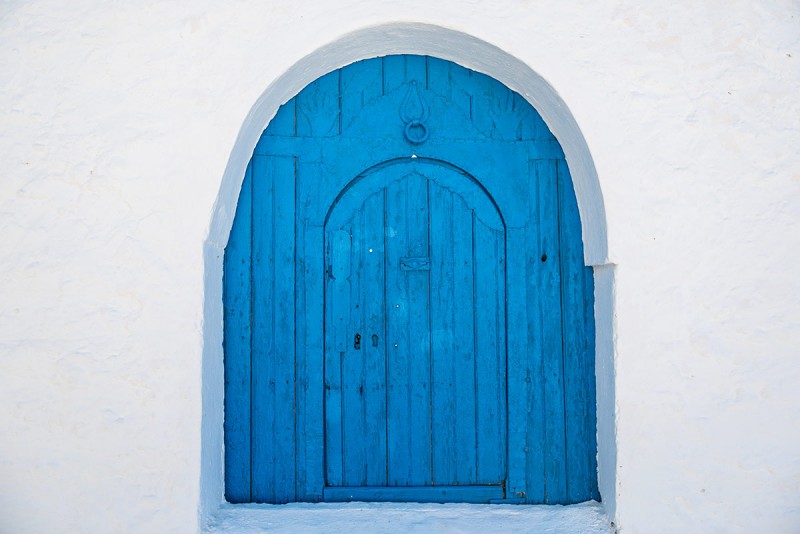 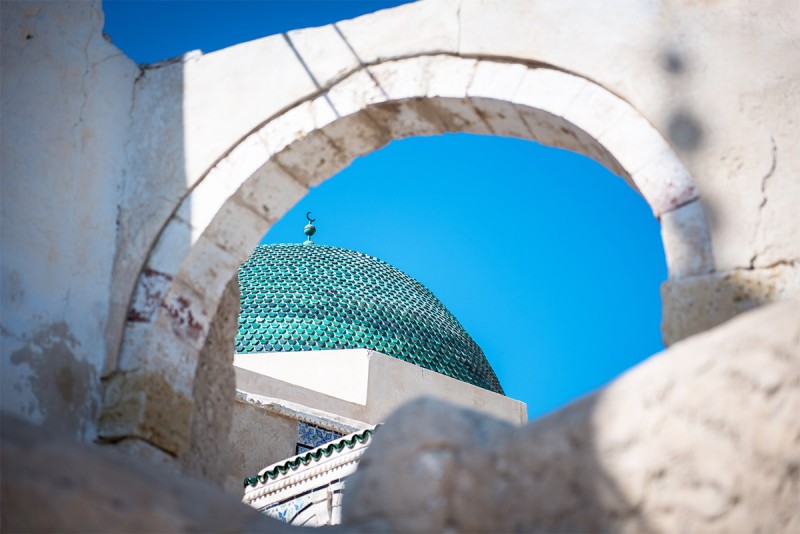 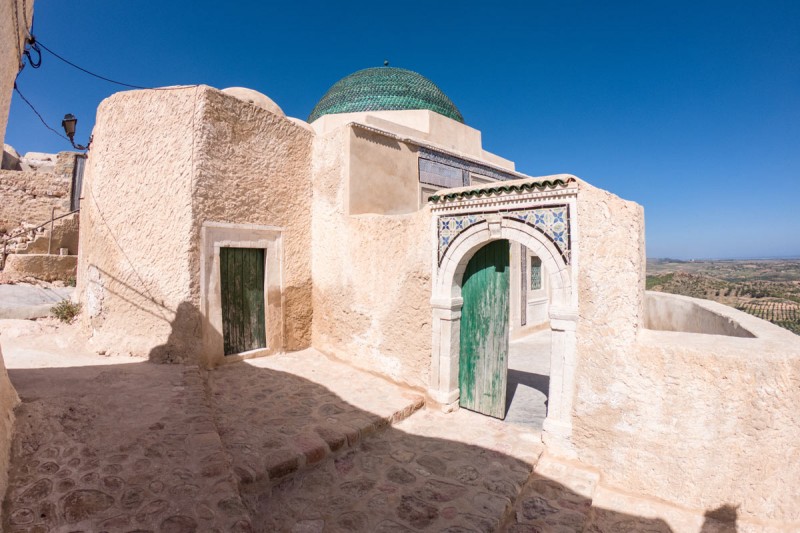 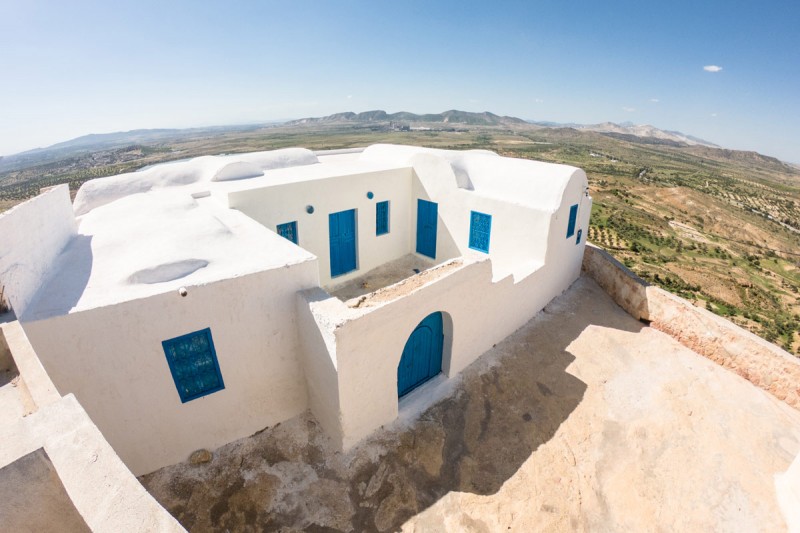 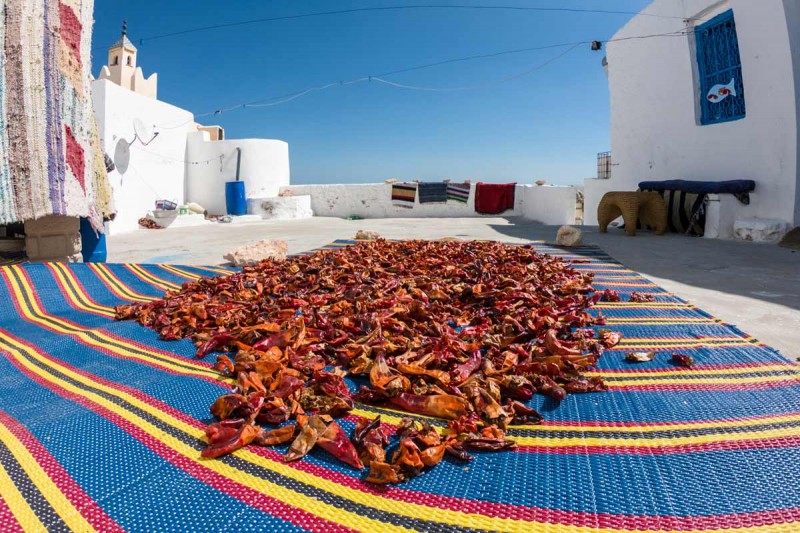 Not far from Takrouna, the village of Jradou has largely lost its authentic character. Its houses were rebuilt with modern materials.
On the opposite, the old village of Zriba (“Zriba Olya”) was almost completely abandoned by its inhabitants who settled in the plain. So it kept its original appearance.
Today, it is a ghost village where you can wander through the paths and stairways, between the small stone houses with decorated doors and vaulted rooms. A mosque and a zawiya were restored thanks to a local association.
It is assumed that the three villages were founded during very ancient periods of insecurity. They could even date back to the Byzantine period (6th-7th century), long before the arrival of the Hilalian Arabs in the area (11th century).
As for the legend of the three brothers, it reflects the shared destiny of these three villages. Founded by the Berbers to protect themselves from potential aggressors, they remained through the centuries and vicissitudes of history. 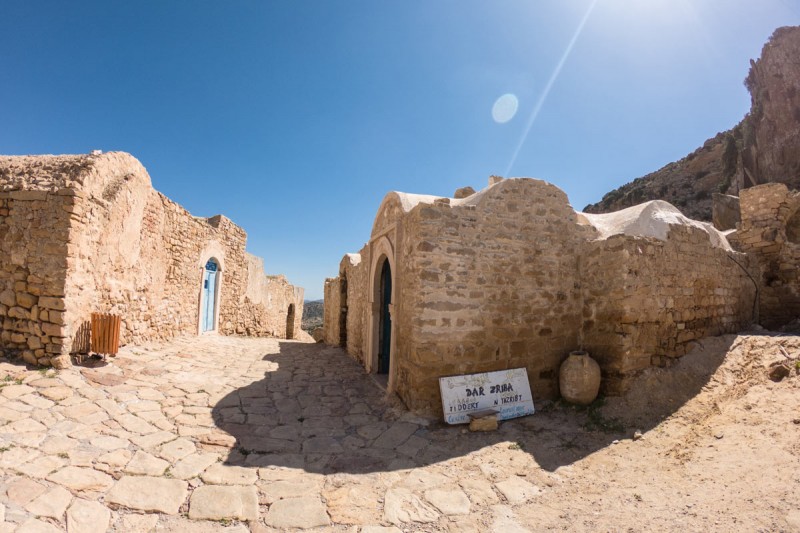 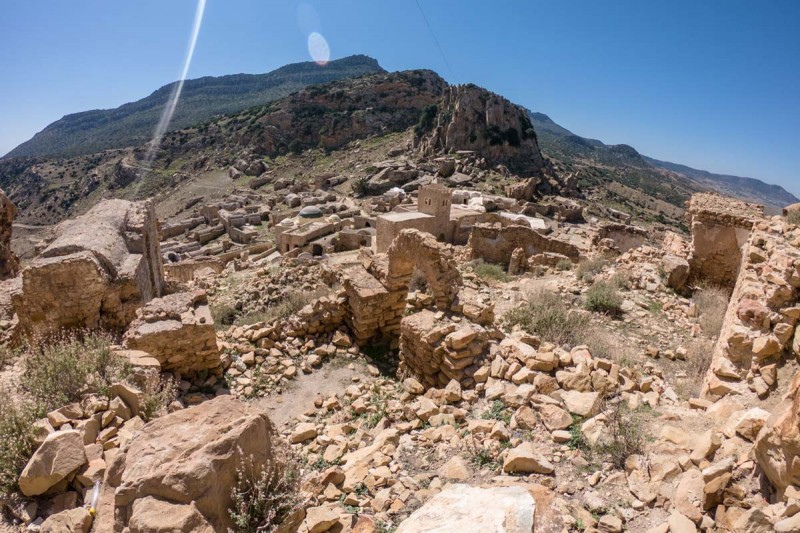 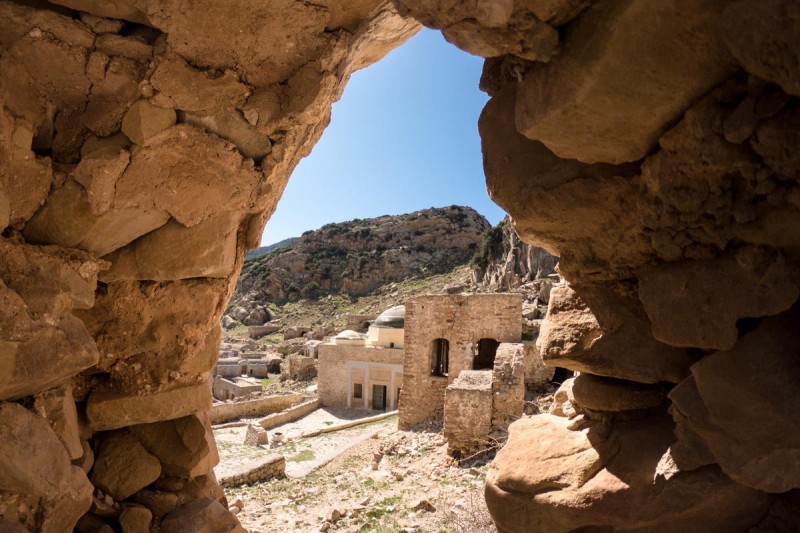 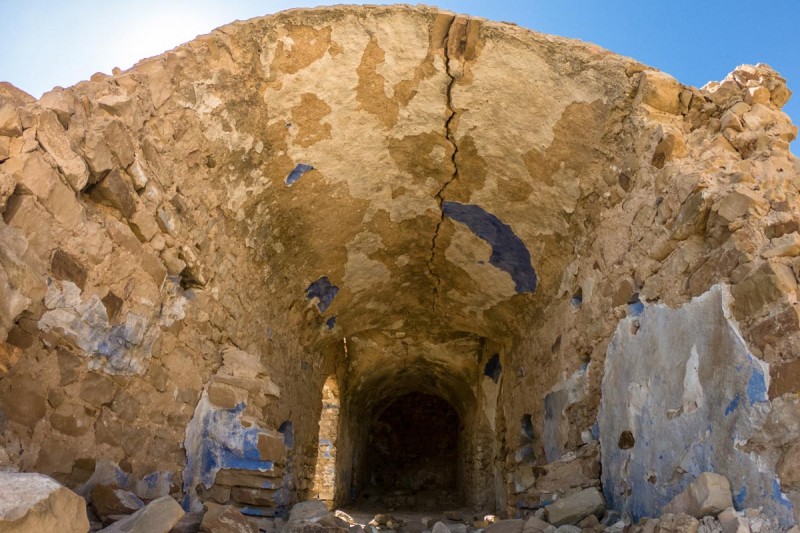 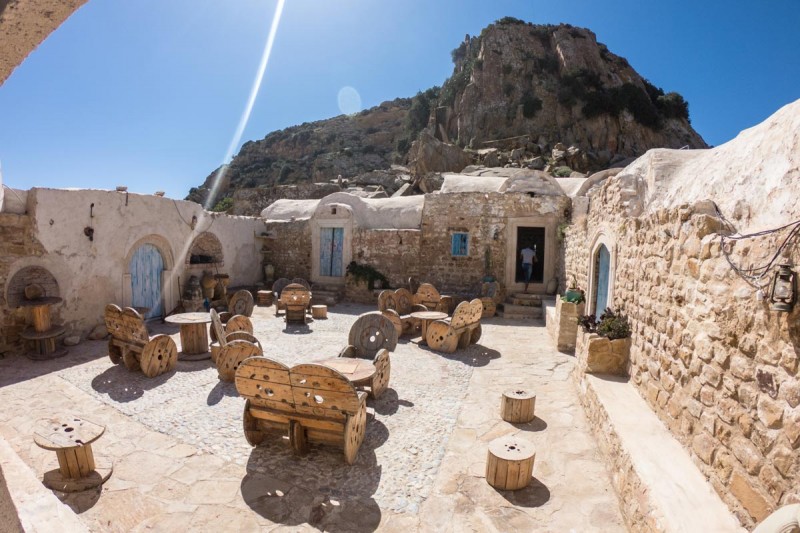 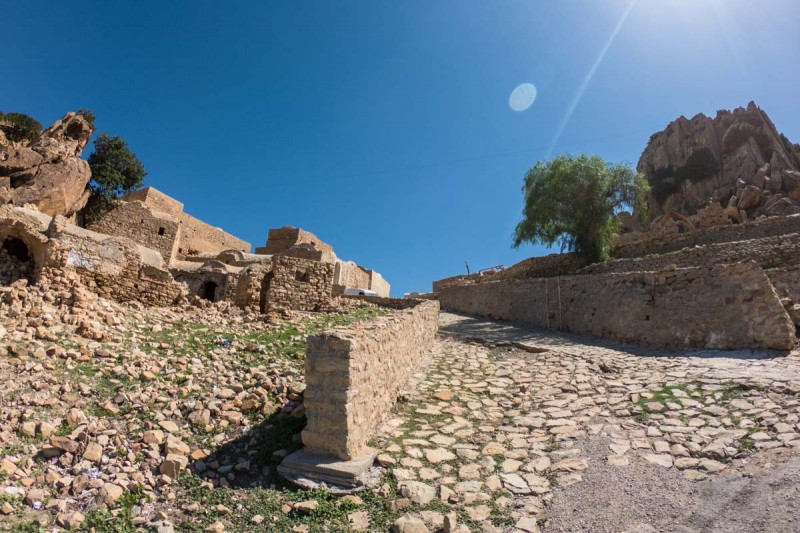 Little stories from the Dahar 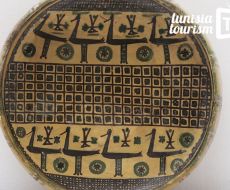