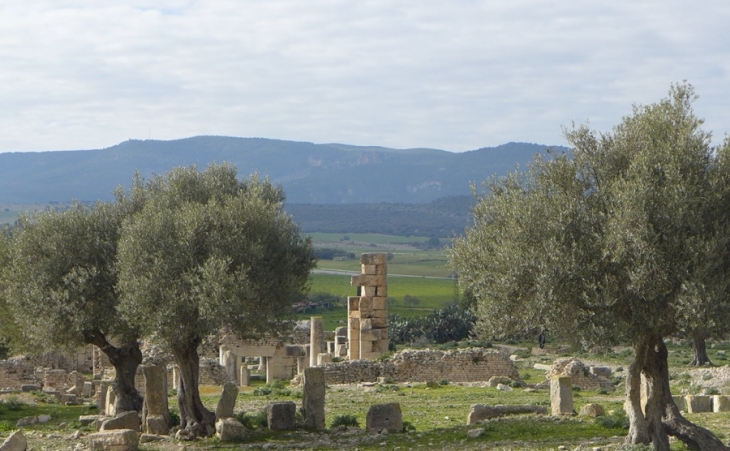 The archaeological site of Ain Tounga shares many similarities with the neighbouring site, the famous Dougga.

Ninety kilometres southwest from Tunis, by the side of the road to El Kef, you can see a large ruined square tower. It is the entrance of an outstanding archaeological site: Ain Tounga, one of the countless archaeological sites of Tunisia which remain without visitor facilities.
The site of Ain Tounga extends on a hillside in a lovely green scenery of fields and olive groves… just like the nearby famous site of Dougga, a UNESCO World Heritage site.
Like in Dougga, there was a town even before the arrival of the Romans. Later, the inhabitants of indigenous origin cohabited with others of Roman origin.
Like in Dougga also, the two communities rivaled each other to equip their town, Thignica, with beautiful Roman style monuments.
The name of Thignica is also linked to Saint Augustine of Hippo, one of the Church Fathers. He gave there a sermon which remained famous.

The site is party excavated; it extends over 30 ha in total.
The monuments of Thignica are smaller and less preserved than those of Dougga. But it includes the main components of a Roman town.
Today, although there is no signage on site, you can identify the different monuments with a little imagination…
(You should be careful and respect the site, as the remains have not been consolidated!) 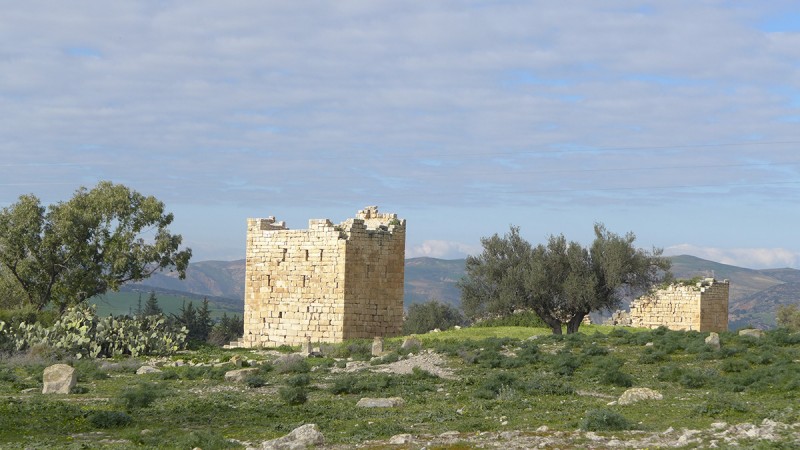 An enclosure made of large blocks of stone… Five square towers, one of which is better preserved and visible from the road: that is the Byzantine fortress.
The Byzantines occupied Tunisia after Romans and Vandals. To maintain order, they covered the whole country with fortresses. 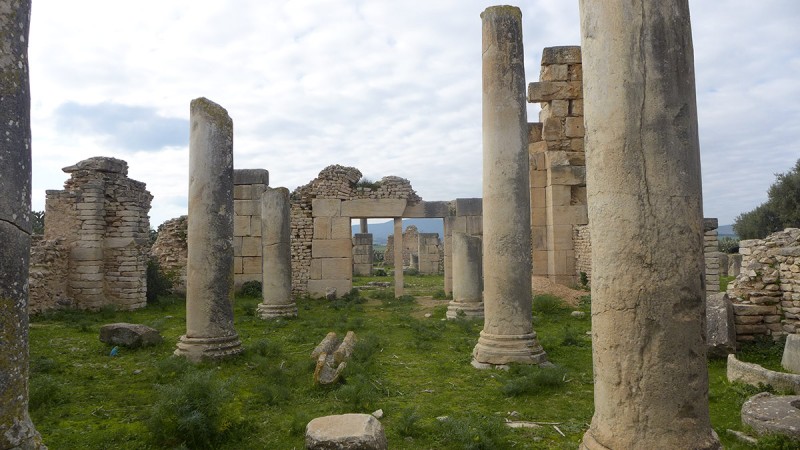 A rather luxurious building, with fragments of columns and capitals… Numerous halls arranged in a symmetric layout… In places, floors and walls covered with a waterproof ciment: these are the Baths – like the Baths of Antoninus in Carthage.
To find them, follow the path on the right after the Byzantine fortress. 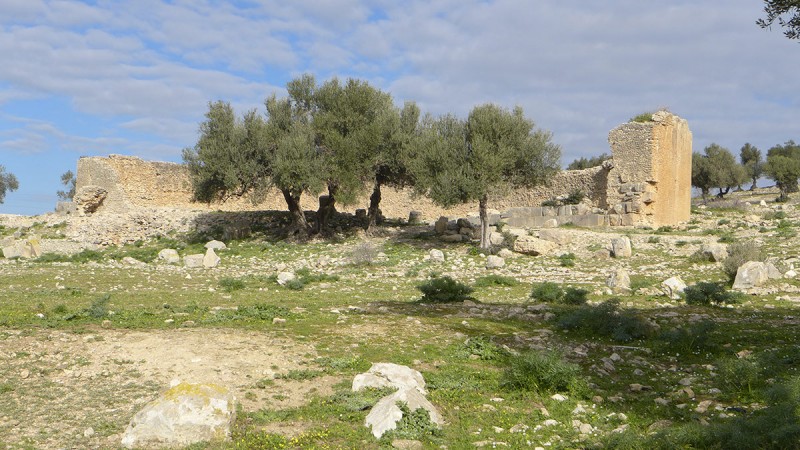 A large semi-circular wall, fragments of columns and cut stone: that is the Roman Theatre, which has lost its stands. You can see it on a hill, to the left from the Baths. 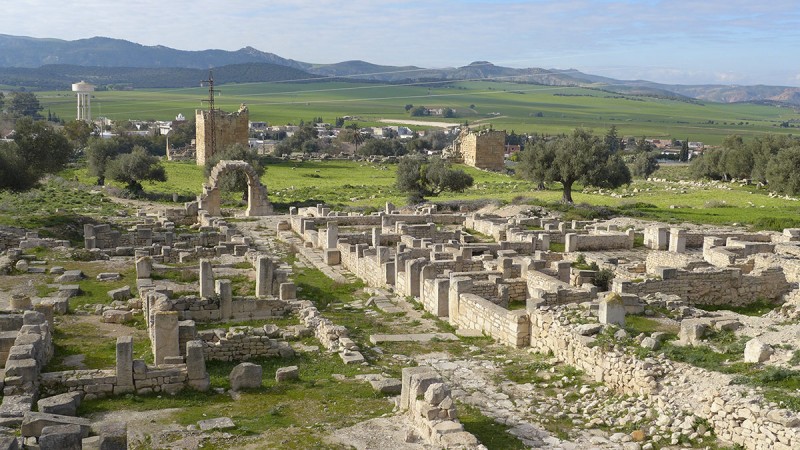 Wall sections defining many rooms, remains of wells and cisterns, a beautiful straight cobblestone street ending with a small triumphal arch: that is a residential area typical of Roman towns in Tunisia. 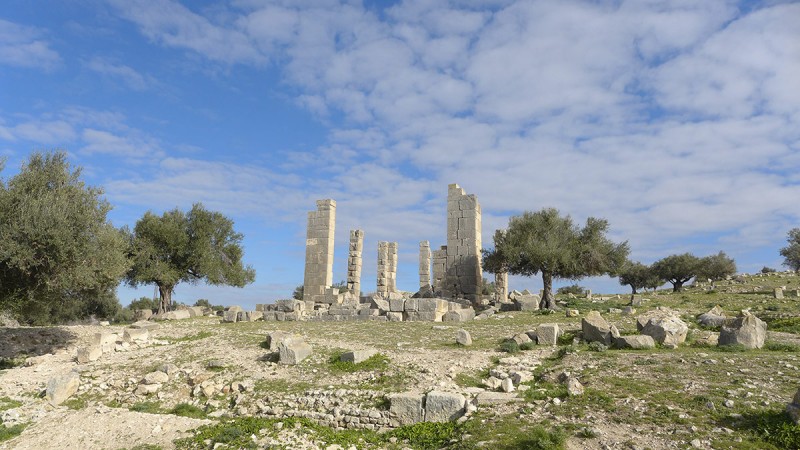 A platform sustaining the ruined walls of a square hall: this was the Temple of Mercury with a façade of four columns.
It is situated on a hilltop and overlooks the residential area and the temple. 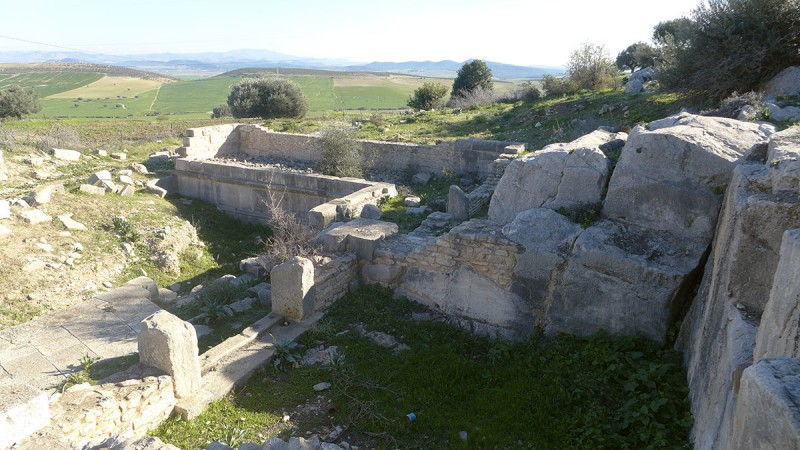 A monument literally stuck to the rock of a hill: that is the Temple of Neptune, the god of sea and water. It was a “Water Temple”, like the one of Zaghouan, made to celebrate Ain Tounga’s spring.
To find it, continue on the trail beyond the Temple of Mercury and bypass the hill to the right. 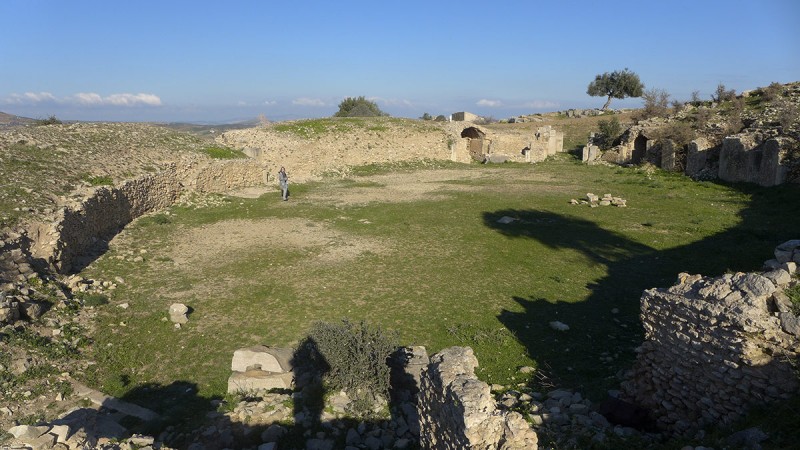 An ellipse-shaped ground, surrounded by remains of stands: that is the Amphitheatre, a public venue for gladiator fights and animal hunts just as in the amphitheatre of El Jem. It was carved in the hill and had two main entrances.
You can find the Amphitheatre by going on another path to the left, right after the Byzantine fortress (the path is more or less parallel to the road).
The site includes other remains of temples. Among them, the Temple of Saturn and Dis was maybe built on top of a former Numidian shrine. 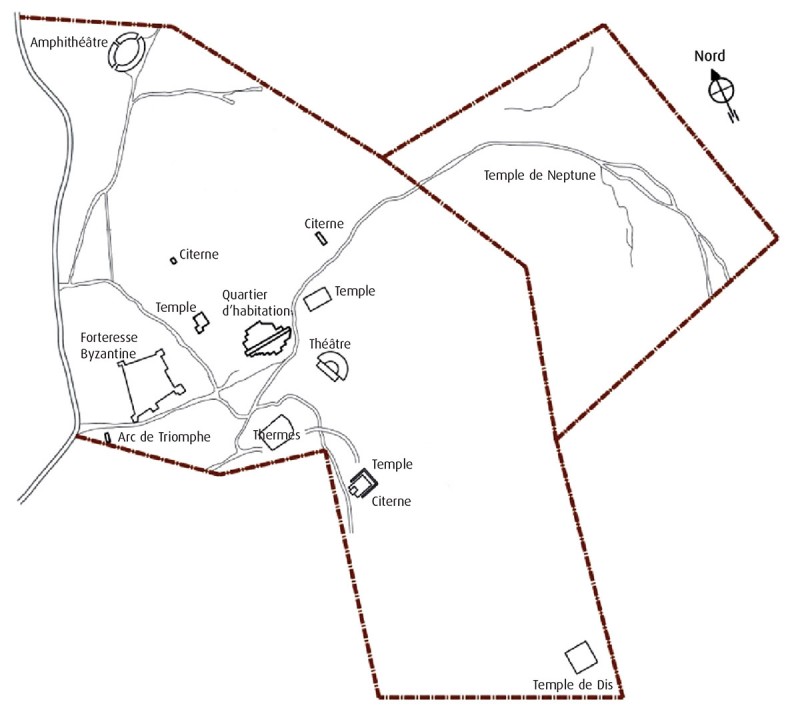 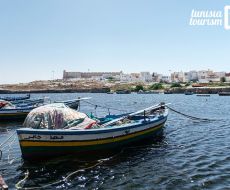