Published : 08-05-2019
TunisiaTourismTV – The city of Kairouan has an amazing historical heritage. Its monuments trace the history of this former medieval capital.
The Great mosque, founded in 670 and rebuilt in 836, is one of the oldest in the world.
The Aghlabid Basins (9th century) were the city’s water reservoirs. They were part of a system made up of fifteen basins, one of the largest hydraulic installations in the Islamic world.
The Mosque of Three-Doors, with its richly carved facade, dates back to the same period.
The zawiya of Sidi Abid (mausoleum and religious foundation) dates back to the era of the Hafsids, sovereigns of Tunis (14th century).
The zawiya of Sidi Sahbi (17th century) is one of the most important holy places in Tunisia. Known as the “Mosque of the Barber”, it is the burial place of Abou Zamaa, a companion of the Prophet who died near Kairouan.
The zawiya of Sidi Amor Abada, with its seven domes, is the shrine of a Sufi mystic from the 19th century.
Twelve centuries after its golden age, Kairouan kept a pious vocation as the first Islamic capital of Maghreb.
Kairouan has been declared a World Heritage Site by UNESCO.
More about Kairouan and its surroundings.
Video: The Great Mosque of Kairouan 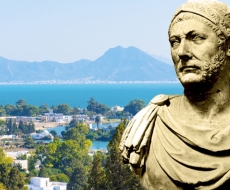 A stroll through the BARDO