The medina of Tunis 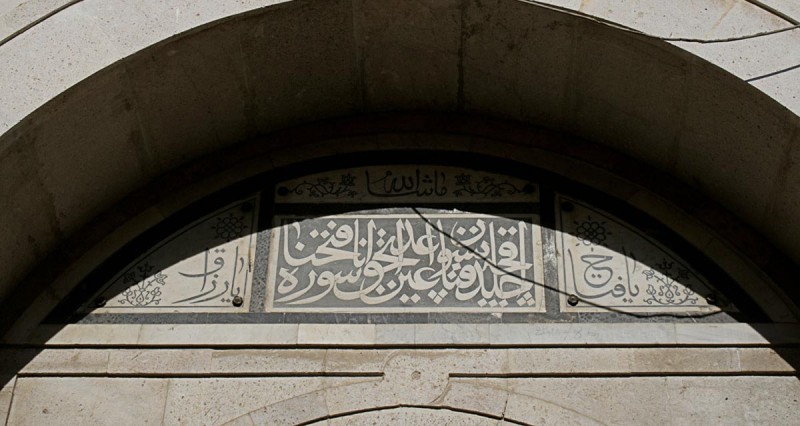 Multifarious and bustling, the medina of Tunis definitely presents many different faces. In this way its long history, enriched by diverse influences, is represented. It has been declared a World Heritage Site by UNESCO.

Throughout the late Middle Ages, Tunis was one of the most important cities of the Islamic world. Today it is one of the largest and most beautiful medinas in the world, rich for its historical monuments numbering in the hundreds, and for its urban fabric typical of Arab cities.

Tunis in the Middle Ages

Its oldest monument is the Great Mosque, known as Al-Zaytuna (Mosque of the Olive Tree). Built in its present form in the 9th century, not long after Kairouan’s – the capital at that time –, they closely resemble one another.

184 antique columns stand in the hall of prayer and hold up the roof; mostly taken from the site of Carthage, here they have been given a second life. Outside, the harmonious decor based on alcoves and red and white arches gives the mosque its own particular character. 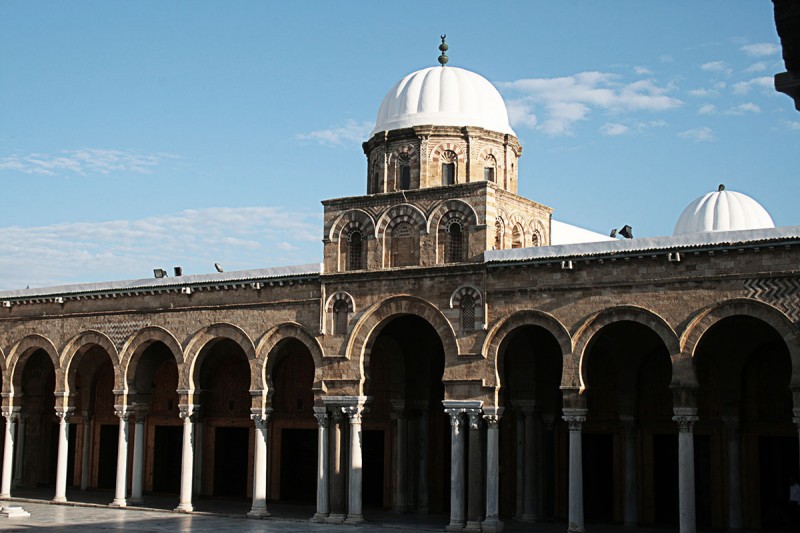 It was in the time of the Almohad dynasty that Tunis definitively took up, in the 12th century, its role as the capital. First, as capital of a province of their empire; then as the centre of the new empire established in the following century by their heirs, the Hafsids.

These Berber sovereigns would enlarge the citadel of the Almohads, the Kasbah, today long gone. Their reign lasted for over three centuries.

Tunis then welcomed many Andalusians as they fled Spain; one of them, the ceramist Sidi Kacem, was also a saint. The pyramid shaped roof of his mausoleum is thus representative of the Hafsid style and his Andalusian influences.

The medina owes its current configuration to the Hafsids.

But many of its features reveal the influence of the Ottomans, who would in their turn integrate Tunisia into their empire from 1574 onwards.

Surrounding the Great Mosque on every side, the central souks are covered markets dedicated to the most well-regarded of activities: tailors, perfumers, booksellers, jewellers, arranged according to their trade.

The at-Truk souk meets the sartorial requirements of the Turks; the souk of Chechias – where a few boutiques still ply their trade – is responsible for finishing and selling these red felt headpieces, a speciality of Tunis, which were once sought after across the Ottoman empire. 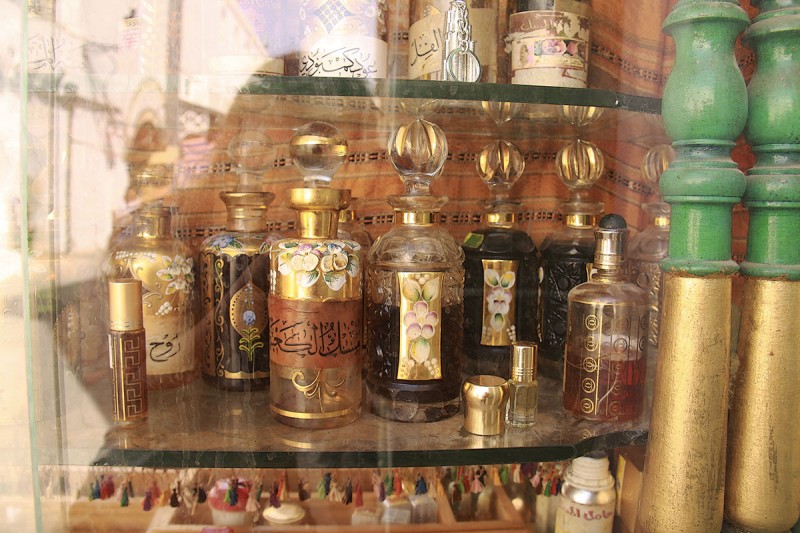 The Turks would build specific mosques for themselves to practice their Hanafi rites. Unlike the traditional Tunisian mosques, these buildings include the tomb of their founder; they are easily recognisable thanks to their octagonal minarets, crowned by a balcony and a lantern.

Youssef Dey, built in 1616 and neighbour to the Kasbah, was the first of these such mosques. More slender and better decorated, the Hammouda-Pacha mosque reflects the prosperity experienced by the city forty years later.

However, a single Ottoman mosque is inspired by the model of the Hagia Sofia or the Suleiman mosque of Istanbul: the Sidi Mehrez mosque, topped with one large central dome surrounded by smaller domes.

In Ottoman Tunisia, power was first held by the Deys, leaders of the Janissary militia; then, quickly, by the Beys, leading an army charged with roaming the country to collect taxes. The latter took up the title of Pacha or governor, then freed themselves from much of Istanbul’s control.

Superb madrasah, religious colleges for the training of jurists and civil servants, date from this period. One of the most beautiful is the es-Slimaniya madrasa, with its elegant arcaded patio, its ceramic panels depicting bouquets in the Ottoman style, its domed ceiling adorned with delicate arabesques.

Many zawiyah, religious foundations, would also be built, such as that of Sidi Ibrahim er-Riahi featuring exuberant decorative elements of sculpted plaster. From the 18th century onwards, the members of the Beylical family would be buried inside a vast funerary complex topped with domes, Tourbet el-Bey.

The city is also home to palaces, hidden behind magnificently decorated doorways; the majority of these date from the Ottoman era. Their rooms are arranged around arcaded patios and lined with ceramic tiles. Carved stone, woodwork painted with flowers or arabesques, basins, ceramic panels and marble inlay… their decoration harmoniously blends the traditional style with multiple Turkish, Spanish and Italian influences. 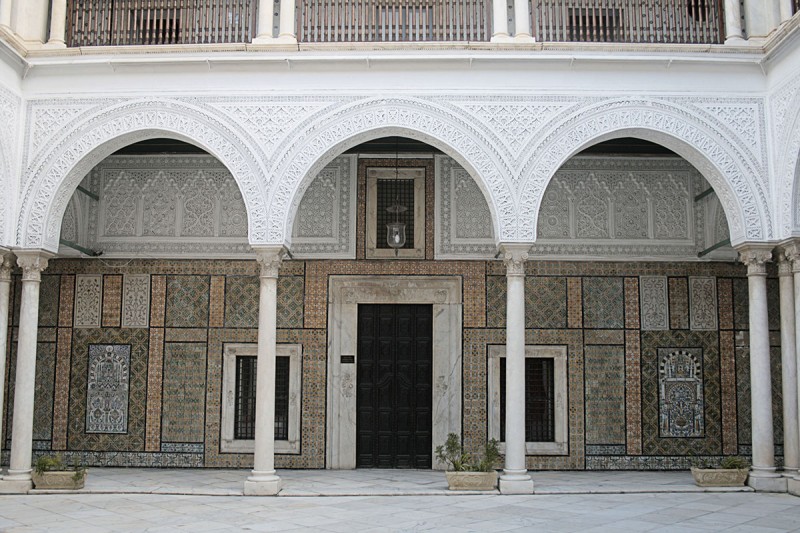 Neglected in the 20th century in favour of the more modern neighbourhoods, the medina of Tunis has preserved its most beautiful monuments and its particular atmosphere. It’s a world of its own where the luxurious and the everyday, the old and the new, the religious and the profane all coexist; a place where the power of millenia of tradition and a mindset open to the world combine.

Twin to the one found in Kairouan and built in the same era, the Great Mosque al-Zaytuna is a vast sanctuary occupying 5000 m2 at the heart of the medina. Its outward exterior owes much to the decorative elements added in the 10th century: arches of red and white stones, juxtaposed alcoves, stone inlay in alternating colours.

The mosque of the Kasbah (13th century) was attached to the Hafsid citadel, today long gone. Its square-based minaret with diamond shaped decorative elements is inspired by the Koutoubia in Marrakech, capital of the Almohad dynasty; today it is the oldest minaret in Tunis. It was used as the model for the reconstruction of the minaret of the Great Mosque, in 1894. 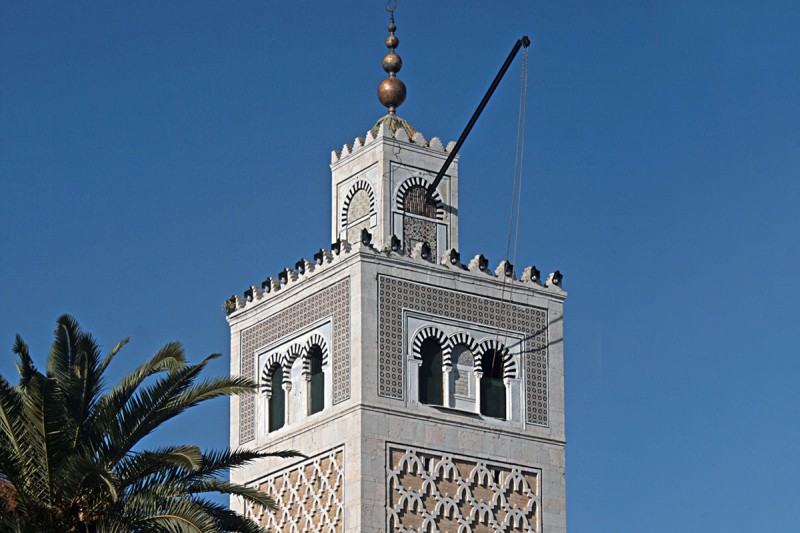 Dar Othman is one of the oldest palaces from the Ottoman era. Its luxurious exterior facade made from black and white marble, its panels of ceramic and carved plaster, its horseshoe arches supported by Andalusian capitals are notable examples of the art of Tunis during the early 17th century. 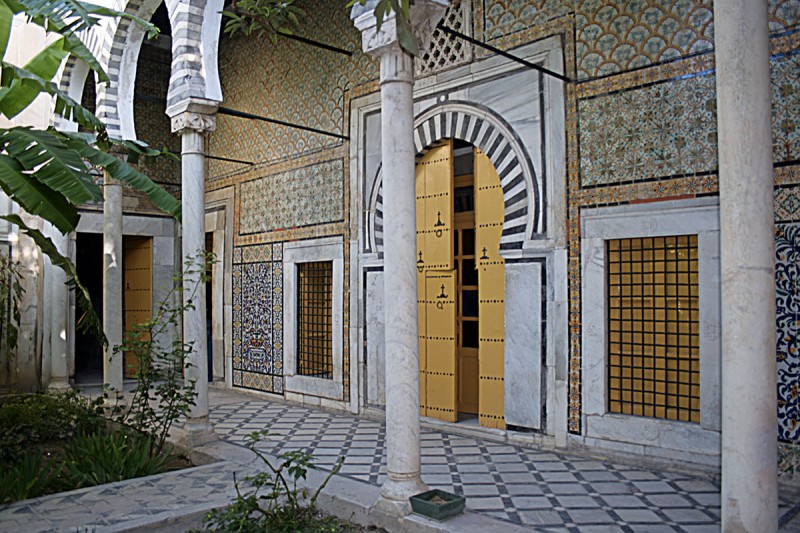 The Hammouda-Pacha mosque (the name of one the greatest Beys of Tunis) reflects the prosperity of the city in the 17th century. Its octagonal minaret, typical of Turkish mosques, is thin and slender; elegant marble inlay adorns the sovereign’s mausoleum which adjoins the hall of prayer.

The Mohamed-Bey mosque (late 17th century) is also known as the Sidi Mehrez mosque. It is the only example in Tunis in the style of the great mosques of Istanbul: a square hall surrounded by a courtyard on three sides, and topped with a large central dome surrounded by other, smaller domes. Nevertheless, the building, unfinished, is devoid of minarets.

The Beys’ second dynasty, the Husseinites, built a private funerary complex for themselves in the heart of the medina known as Tourbet el-Bey. It is a collection of richly decorated rooms and courtyards, covered with domes, some round, some oval. The male tombs are topped with a Turkish headdress or turban sculpted from the marble. 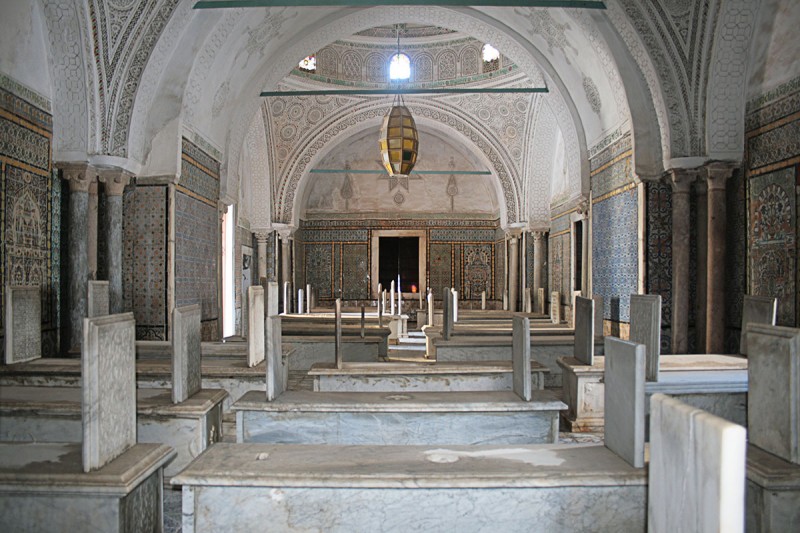 Tunis and its surroundings